Manchester City are one of the few clubs who’ve been linked to Benfica star Darwin Nuñez for a long time now.

Pep Guardiola’s interest in the striker started being reported last year, following the player’s move to the Eagles in a €24m deal from Almeria. Back then, it was said the coach wanted to keep an eye on his first steps in Portugal.

Darwin did pretty well in that first season, with 14 goals and 12 assists, and now that he’s drawing attention from all over Europe, we’re again seeing Manchester City labelled as contenders for his signing.

Newspaper Record today features an interview with the striker’s agent Edgardo Lasalvia. Most of the chat was about the player’s start to the season, and only the last question was really about a potential move. 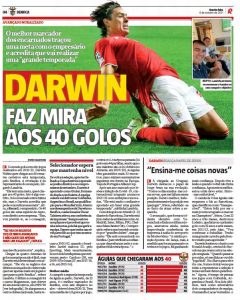 Record mentioned that Darwin is ‘on the radar’ of a few European clubs, including Manchester City. So Lasalvia highlighted that there’s been approaches from ‘big clubs’, but didn’t want to feed the rumours too much.

“He’s focused on Benfica. He wants to repay the trust they have placed in him and win titles this season.”

Darwin has scored six goals in eight appearances this season, having his peak when hitting a brace against Barcelona, a match Manchester City scouts were present at. The striker is protected by a €150m release clause.