One of the big stories being pushed by Gazzetta dello Sport these days is that of Juventus’ interest in Gabriel Jesus.

The Manchester City star is in an interesting situation, where he should be the next man up following the departure of Sergio Agüero, and yet he doesn’t seem to be fully trusted by Pep Guardiola after a rather disappointing season by his standards.

Scoring just 14 goals in 42 appearances, the Brazilian has since seen the likes of Harry Kane and Erling Haaland linked to the club, and that’s opened a door for Juventus.

We’ve covered a couple on the story already, mostly all from Gazzetta dello Sport, and the newspaper continue on Wednesday, saying that Manchester City ‘seem willing to grant a loan with an obligation to buy, which would allow Juventus to spread the investment over several seasons’.

That being said, the Serie A side would prefer a loan with an option to buy, although the Italian outlet does admit that such a formula is ‘almost always impossible to obtain for a player’. 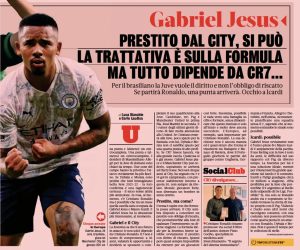 One that could grow in the coming weeks, depending on the moves made by Manchester City, but it seems Gabriel Jesus, a firm fan favourite at the Etihad, could be living his last few months in the north west of England.

However, one important point, all of this depends on whether Cristiano Ronaldo goes.

If he stays, the Brazilian stays put.