Manchester City’s struggle to sign Napoli centre-back Kalidou Koulibaly has seen them look at other options in the final weeks of the transfer window.

Reports from England suggested the Citizens have identified Sevilla’s Jules Koundé as an alternative to Koulibaly.

Mundo Deportivo have relayed these claims and suggest Koundé’s game fits very well into Pep Guardiola’s model. However, City’s interest has not translated into an offer.

The defender has a €90m termination clause, and the Catalan newspaper states the Europa League winners are referring to his high release clause to sanction summer sale.

Estadio Deportivo also provides information about the English club’s interest in the France U21 international.

It’s claimed that City’s idea is to spend around €60m on a new centre-back. It is the same figure they offered for Koulibaly, but Napoli have rejected their proposal.

Koundé has emerged as ‘plan B’ for Guardiola’s side, but City received a ‘strong response’ from the Spanish club as they continue to refer the player’s buyout clause.

Despite finances being impacted due to the Covid-19 crisis, the report states Julen Lopetegui’s side will not allow their players leave if their asking prices aren’t met.

City are looking to raise funds through the sales of John Stones and Otamendi, and their exits will also free space in the squad. 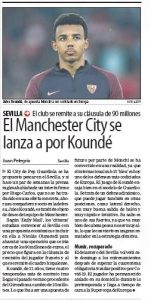 A potential swap deal involving the Argentine and Koundé has been ruled out because Sevilla cannot afford Otamendi’s high salary.

Estadio Deportivo’s title states there’s a €30m difference between ‘what City offer and what Sevilla ask for Koundé’.

In other words, unless the Citizens agree to pay the centre-back’s €90m release clause, a deal to sign the Sevilla defender is unlikely to take shape in this window.

That stance is hard to believe, with the Spanish club often selling players for less than their clause.