Manchester City star Sergio Agüero has been regularly linked with a move to Barcelona.

The Citizens have confirmed the striker will leave the Etihad after this season and he can join another club on a free transfer in the upcoming window.

Reports earlier suggested Ronald Koeman prefers Lyon’s Memphis Depay over the 32-year-old as the Netherlands international is also available on a free transfer. There seems to be a new development in Agüero’s chances of joining the La Liga side.

‘Kun Yes’ is splashed on the front page of today’s Mundo Deportivo and within the report it’s stated the Catalan club have given the ‘green light’ to sign Pep Guardiola’s man.

The Argentine is ‘crazy’ about joining the Blaugrana and the possibility of his signing for the Camp Nou side is ‘gaining strength.’ His camp have already offered the player to Barca, even before Joan Laporta was elected as president.

Those in charge at the club ‘welcome’ his signing and the Manchester City player’s entourage has made Barca aware of his desire to share the dressing room with Lionel Messi on a daily basis.

As per the report, contacts between the two parties intensified in recent days, and Agüero, who earns €12m net in Manchester, is willing to take a pay cut to seal the move.

Mundo further adds Agüero’s addition to the Barcelona squad would help the club in retaining Messi, who also has a contract expiring on June 30th. 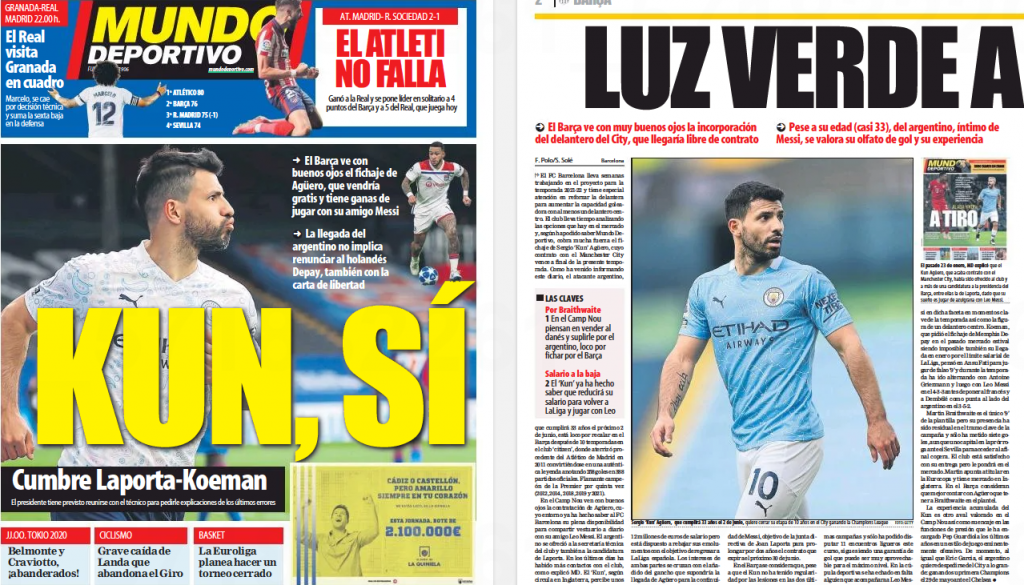 Joan Laporta and his board’s desire is to offer Messi a two-year extension, and the City player’s signing would help them with this cause.

Agüero will turn 33 years of age next month and despite his age and recent injury history, his experience and ability to score goals is valued at a lot at Barcelona.

For now, the former Atlético Madrid man, like Eric García, is hoping to say ‘goodbye to City’ in a ‘big way’ by winning the Champions League later this month.

Any announcement on their futures is likely to take place after the European final against Chelsea.

Mundo also points out the arrival of Pep Guardiola’s star at Barca wouldn’t stop them from making an attempt to bring Depay to the club in the summer.