This week’s edition of SportBild states Bayern Munich have not started negotiating directly with Manchester City for Leroy Sané.

It’s claimed the current champions of England and Germany are testing the ground to see how far each one can go to ‘accommodate the other’ in transfer negotiations.

The Bavarian club feel they are in a ‘strong position’ and are considering making an opening offer of €40m for the winger.

City paid a reported fee of €50m for the Germany international and letting him leave for a fee in and around that range would be a disappointing scenario. If they decide against cashing from the player’s sale in the summer, he could leave the Etihad as a free agent in 2021.

To achieve the transfer, Sané is ready to forego 30 percent of the salary that was proposed to him before the Covid-19 crisis.

Even after that, the report states his finances would ‘improve significantly’. Sané is believed to earning €9m net per season at City and Bayern plan to significantly improve that figure. It’s stated their top earners are drawing a salary in excess of €15m-a-year. 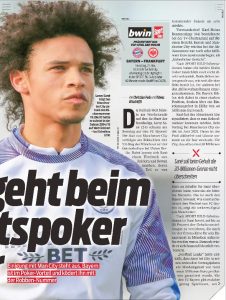 Hans-Dieter Flick’s side are also ready to hand the player the No 10 shirt.

With Sané ready to forego part of the salary that was offered earlier and showing keen interest in the transfer, it’s now between two clubs to find an agreement for the deal to take shape.