Manchester City goalkeeper Claudio Bravo is a hot topic in Chile today, since he’s finally returning to the national team.

After two years of controversies and speculation, the player has finally been called up by manager Reinaldo Rueda, and will be representing his country in the international break.

Newspaper El Mercurio recalls today all the events which left Bravo out of the squad, having made his last appearance in October 2017.

They say it all started with his wife going public to criticise Arturo Vidal. Then Bravo himself made heavy comments about the national team coaches, and that practically confirmed his rebellion against the Chilean FA.

When the player got an Achilles injury last year, his family confirmed no players from the national team gave him a call to wish him a good recovery, and that showed the tense mood among the squad. 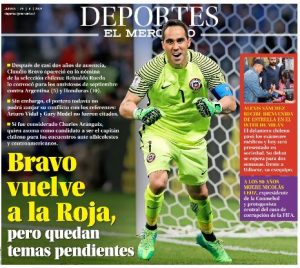 Despite Bravo’s return now, it’s claimed there’s a lot to be sorted with other players. Some like Gary Medel and Arturo Vidal, who are involved in the situation, have not been called up this time, so that’s an issue to be solved later.

A source from the national team spoke to El Mercurio and said: “Knowing Rueda, it’s more certain that he’s spoken to Medel and Vidal before calling Bravo”.

Meanwhile, Bravo celebrates his return, and perhaps is now aware that he doesn’t need to leave Manchester City to get more playing time and impress Reinaldo Rueda.