Leroy Sané gets a mention in this week’s edition of SportBild.

For more than a year, there have been countless reports linking the Manchester City winger with a move to Bayern Munich.

Earlier this month, Hans-Dieter Flick’s position at Allianz Arena was made permanent and he was offered a contract until 2023.

A few weeks ago, there was a phone call between the Bayern manager and Pep Guardiola’s man, and the conversation lasted for 30 minutes.

Flick had long been ‘sceptical’ about his side investing heavily in signing the City attacker.

This also led to tension between him and sporting director Hasan Salihamidžić, but that’s now believed to be resolved under the guidance of new board member Oliver Kahn.

Bayern paid €80m to take Lucas Hernandez last summer and the Frenchman has struggled with injuries this season. The defender was recovering from a serious injury when the club signed him.

Despite Hernandez’s injury situation, the club’s supervisory board decided to go ahead with the transfer last summer and this was confirmed by Salihamidžić.

SportBild stresses the importance of Bayern’s supervisory board, because they need to give an approval to every signing that will cost in excess €25m. 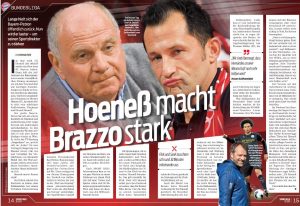 It also means they need to give a green signal to sign Sané, who has not featured for City since suffering a knee injury last August.

With Flick changing stance on the City player and the supervisory board giving approval to Hernandez’s transfer despite his injuries, it gives an indication Bayern are on the right path to signing Sané in the summer.