On Monday, Mundo Deportivo reported Barcelona will have the money to get Manchester City’s Raheem Sterling in the winter market.

The winger was linked to the La Liga side in the summer, but a deal couldn’t happen due to Barca’s delicate economic conditions. There’s belief the situation will be different when the transfer window reopens in January.

After losing Lionel Messi and Antoine Griezmann in the summer, and with Martin Braithwaite joining Ousmane Dembélé and Sergio Agüero on the injury list, Ronald Koeman is left with limited options in attack.

Mundo Deportivo on Tuesday explain the Catalan club’s ‘priority’ in January is to sign a forward. Sterling and RB Leipzig’s Dani Olmo are on Barcelona’s list.

The England international, who has made only two league starts this season, is ‘getting less and less’ into Pep Guardiola’s plans. Therefore, the newspaper says he ‘would be interested’ in changing clubs. 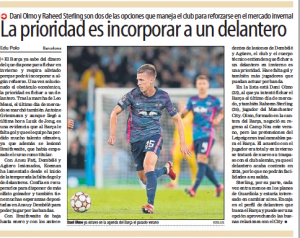 Sterling fits the option Barcelona are looking for and the latter can take advantage of their good relationship with City for a potential signing.

Over at Sport, they have a ‘confidencial’ report, titled: ‘Sterling, crazy to come to Barca’.

It’s said Mateu Alemany, the Spanish club’s chief made a trip to Manchester towards the end of the summer window to try and agree a loan deal for the 26-year-old.

There was ‘full predisposition’ from the player to make a switch to the Camp Nou.

However, Manchester City were not in favour of a transfer, following their failure to sign a new striker.

Despite the failed efforts to sign the ex-Liverpool man, the Blaugrana have maintained contact with his environment.

Sterling, as per Sport, ‘wants to leave’ City and ‘understands’ he can play a leading role, if he ends up at Barca.

Regarding the City attacker, Sport further state: ‘This bullet is still in the chamber a few months from the January market, although everything will depend on the sporting situation of a team that must fight to stay alive in winter.’

Star ‘will be a Liverpool player’ – Reds have presented ‘formal...

Newcastle warned ‘monstrous economic power’ might not be enough to get...