Those who follow Manchester City star Bernardo Silva on social media probably saw yesterday the big text he published about the elections at Benfica.

The midfielder was demanding change at his former club, in a statement which was a clear attack to the current president Luís Filipe Vieira.

It turns out that Vieira has been in charge for many years, and was the president back in the time when Bernardo Silva left the club in 2014.

At that stage, the manager was also Jorge Jesus, who returned to the Lisbon side this summer.

Bernardo Silva’s departure from Benfica has always been full of controversies. That’s because he wasn’t used a lot until moving to Monaco, and both Luís Filipe Vieira and manager Jorge Jesus were highly criticised for that.

Recently, the Manchester City player was even accused of asking to leave the Eagles because he wanted more money.

So following his text from yesterday, both Vieira and Jesus spoke to the local press at Benfica’s match against Belenenses last night. And both proved to be quite upset with Bernardo Silva. 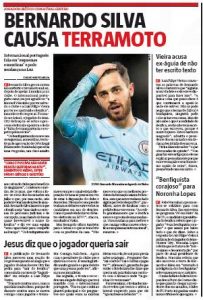 “For many years, I never wanted to talk about it too much, because for many years he messed with me as a player and coach”, said Jorge Jesus (via Record). “It’s okay with me … Now with the club president who helped him grow. He’s very ungrateful and that’s worst defect that a person can have.”

Meanwhile, president Luís Filipe Vieira, who’s running on a new election, said: “Surely it wasn’t him who wrote that text, it i’s unthinkable that he wrote it. Someone helped him. I’ll continue to support him wherever he is because he’s a Benfica player and that no one can question. Now, he doesn’t know what Benfica’s reality is today, otherwise he wouldn’t have written what he wrote. It’s very unfair and I am very hurt.”