Home Europe Man City one of the ‘strongest teams’ bidding for youngster, believe they...
SHARE

Last October, we covered a report from Sport, who claimed that Manchester City have made a ‘very attractive’ offer for Barcelona academy midfielder Ilaix Moriba.

Over a month later, Mundo Deportivo reported the La Liga winners are worried that Pep Guardiola’s side could snatch the 15-year-old.

Today’s edition of Catalan newspaper Sport has an update about the midfielder, who will turn 16 on January 19th and it’s claimed the teenager will ‘decide his future’ this week.

He has two options in front of him, which is to renew with the Blaugrana or accept one of the offers he has on tables.

City once again gets a mention and the report explains they are one of the ‘strongest teams’ bidding for Ilaix, along with Chelsea and Juventus. 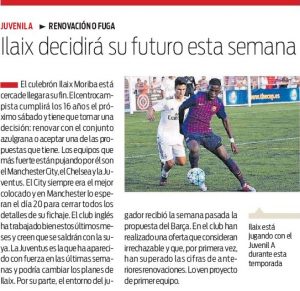 The Premier League winners have ‘worked well’ in recent months and the aforementioned reports are the indication for the same.

Sport says City believe they will get him as they wait in Manchester to close the signing on January 20th.