For the past few months, the race for Sporting fullback Nuno Mendes has been a mix of claims on how interested Manchester City and Manchester United are in his signing.

This week, there’s been several stories claiming the Red Devils could soon make a bid for the 18-year-old, especially after his agent Miguel Pinho was present at Old Trafford on Tuesday.

But the tide now points to the other side of the city, since A Bola today features a story claiming City have €60m to sign the Lions’ starlet.

It’s said Mendes is a player who’s liked by Pep Guardiola and Txiki Begiristain, and that’s why Manchester City have that amount ‘reserved’ to sign the left-back in this transfer window. 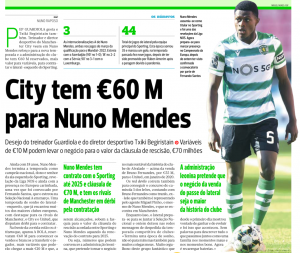 More than that, Manchester City actually have €10m for add-ons. That means the total amount would get to €70m, which is the figure of Mendes’ release clause, and the numbers that Sporting have always been looking for. That’s why, according to A Bola, an offer like this ‘could convince’ the Lisbon club of selling him.

Meanwhile, Manchester United are still said to be still interested in the signing, and are hopeful that Bruno Fernandes, who’s also represented by Miguel Pinho, could help with the transfer.

The newspaper points out the agent is still in Manchester.