Manchester City have long been after Barcelona youngster Ilaix Morbia and had plans of signing him once he turned 16, which was on Janaury 19th.

Earlier this month, Sport reported that Chelsea joined the race to sign the midfielder after their owner Roman Abramovich gave permission to Blues director Marina Granovskaia to ‘go with everything’ to get the transfer.

A few days before he turned 16, Ilaix had stopped training and recent reports suggest the La Liga winners are set to retain the teenager, despite interest from elsewhere.

Today’s edition of Catalan newspaper Mundo Deportivo claims that Ilaix has still not signed his first professional contract with the Blaugrana, but everything indicates that he will continue with the Spanish champions.

The Premier League winners and the west London side were the clubs that ‘most tempted’ him, but it’s claimed that Ilaix has rejected other approaches as he wants to stay at Barcelona.

Having missed training for two weeks, the young midfielder had already returned to on Wednesday, even though his future is still not resolved. 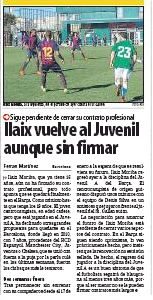 Even though Barca are optimistic about his stay, Mundo says the deal is not yet sealed but the player’s return to training is seen as a good sign.