Before the January transfer window opened, Mamadou Sakho knew he’d need to find himself a new club. Therefore it wouldn’t be too unreasonable to believe he’d have been encouraging his advisers to find him one.

Signing for Crystal Palace after leaving it as late as possible, there were claims Southampton, Stoke City and West Brom were all tussling for the player, and ended up somehow beaten.

Clearly ostracised by Jurgen Klopp, with the reasons for that fall-out still unclear, Sakho must have been ultra keen to find a new club. The defender hasn’t given up on his international dreams and still, perhaps strangely, his ability is held in high regard in France, despite the excellent central defensive options open to Didier Deschamps.

It’s often suggested that if Sakho can, more or less, sort himself out, then he’d be edging towards the France squad. That’s quite some dangled carrot.

Sakho’s main problem, perhaps coupled with ambitions of interest from clubs above his current station, was that Liverpool have been determined to get their money back on the player. It was a wholly unreasonable stance, since moving to Liverpool from PSG, Sakho hasn’t seen his stock rise.

Signing for Liverpool as a 23 year old filled with potential and promise, Sakho is now 26 and facing a new reality. The drug ban which was overturned had been dished out because Sakho had tested positive after taking fat burners, which isn’t an ideal situation for a professional footballer to be in. 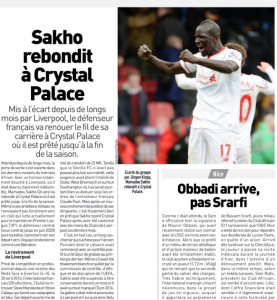 Nevertheless there was interest. The great career builders, and rebuilders, at Sevilla came knocking but baulked at the idea of paying €23m for ever so slightly damaged goods. French newspaper L’Equipe report that the same happened with West Brom, Southampton and Stoke City.

Southampton are picked out as an especially attractive destination because their manager is Claude Puel… and he’s French.

The asking price, and that it was a price at all and not a loan, ‘extinguished’ the interest of the above clubs according to the French newspaper. At the last minute, with Crystal Palace the only club in town, Liverpool relented and agreed to a loan.

Crystal Palace fans saw through the claims coming from France as if they were glass, but if Sakho excels it won’t be an issue. There’s a reason Sevilla, West Brom, Southampton, and Stoke were interested, and that’s because Sakho still has it in him.

Turning 27 years of age next month, Sakho is a great age for a defender. He hasn’t played top level football this season, but he has been playing, and will come without the niggling injuries carried by so many at this time of the year.

Sam Allardyce could be perfect for Sakho, awakening a will to win and a desire in the player which made many Liverpool supporters fall in love with him.

But Sakho has to be up for this. He has to buy into Crystal Palace and Allardyce, and not be constantly thinking he should be somewhere ‘better’.

Mamadou Sakho be given all the support available by Crystal Palace and the club’s fans will come up with, in the nicest possible way, a typically ‘nouveau Palace’ way of getting behind their potential cult hero… he needs to deliver.