Home Europe “We would have loved to see a green and white stand” –...
SHARE

One of the big games on Thursday night is that of Celtic against Lille.

Neil Lennon’s men haven’t had the best of starts in the league, losing their big derby against Rangers, and, following a disappointing failure to qualify for the Champions League group stages, will want to redeem themselves in the Europa League.

They were handed a tough group to do that in, drawing the likes of the Ligue 1 club and Milan, with their adventure starting with a 3-1 loss to Zlatan Ibrahimović and co.

The fixture against Lille, however, will be a good chance for them to kickstart things properly and put the few past disappointments behind them.

It’s a game the French media are really looking forward to, such is the excitement that normally follows Celtic around Europe when they travel.

La Voix du Nord, the local Lille paper, describe the Parkhead residents as a ‘mythical club’ presenting itself at Stade Pierre-Mauroy for the first time. 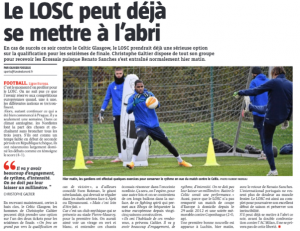 They write: ‘We would have loved to see a green and white stand and hear the Scottish songs resonate. It will be, we hope, for another time and we’ll make do with those long balls into the box, that fighting spirit that allows the Bhoys to frequent the European scene for 25 consecutive years’.

One thing that will help Lille in all this is the return of Renato Sanches, who came off as a precaution in their last league game, but appeared in training on Wednesday.