Ralf Rangnick’s future at Manchester United is yet to be ‘concretised’ despite reports he will be moving into a consultancy role in the summer.

That’s according to SportBILD, who say the agreement in place at this moment in time is more of a verbal one than anything formal.

The newspaper explains that Rangnick’s job at Manchester United is very much ‘temporary’, something the club has always made clear by regularly labelling him as interim coach in every announcement.

That’s left the German’s influence as ‘limited’, particularly as United have only let him bring in two of his own coaches up to this point.

That’s caused issues behind the scenes, where there was a clash with Paul Pogba after he visited a private physiotherapist, and Cristiano Ronaldo after he was substituted against Brentford.

That’s reportedly changed in recent weeks, with a ‘better sense of cohesion’ behind the scenes after Rangnick had ‘individual discussions’ with players, including a long exchange with Ronaldo. 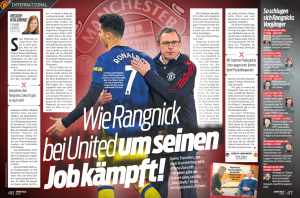 Whether that bears fruit remains to be seen, as does the future of the Manchester United manager, whose two-year ‘consultancy’ role has ‘still not been concretised’.

Rather than a firm deal, SportBILD say he only has a ‘letter of intent’, and there have been ‘no discussions’ about the future since he took the job either.

Rangnick has made it clear he would like to stay and publicly said as much during his unveiling, but so far, it seems Manchester United are yet to make a decision.

That leaves the German focusing on fixing the issues on the pitch and securing a top-four spot this season, something that may be easier now he’s gotten the bigger names on his side behind the scenes.