Mauricio Pochettino wants to improve his Tottenham squad this summer and has seemingly been given the funds to do so.

Adding a new midfielder to his squad appears to be a priority and around the top of the list is Giovani Lo Celso.

The Argentine scored 16 goals, as well as registering six assists, in all competitions last season during a highly impressive loan spell with Real Betis.

They moved quickly to make his move a permanent one this summer but know he’s likely to be there for a short time at best. Tottenham are one of several European clubs keen on the 23-year-old’s signature.

Yesterday we brought you news, from Estadio Deportivo, that Pochettino was ‘determined’ to add his compatriot to his squad this summer. They ascertained that Spurs wanted the move but were struggling to match Betis’ asking price.

Estadio Deportivo doubles down on that claim today. In their latest update on Lo Celso’s potential move, they say no club has offered more than €55m at present. That bid came 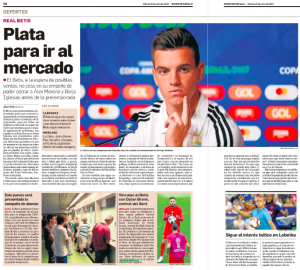 However, the other interested parties, including Tottenham, have ‘expressed their intention’ to raise their own bids. They are unlikely to match Betis’ valuation of €75m though.

Betis, according to Diario de Sevilla, need sales so they can bolster their coffers for their own signings, so would be looking to get as high a price for Lo Celso as possible.

And it seems that desire alone is holding up any potential deal for the Argentine at present.