In a press conference yesterday, Porto midfielder Otávio was quizzed about Liverpool’s interest in signing him during the summer.

The player claimed he didn’t know anything about this chase, and as we pointed out, this is a rumour which has been quiet since the start of July.

Now as Portuguese newspaper Record writes about that question, they claim the Reds still have an eye on the 26-year-old.

When starting their story, the outlet writes that Otávio is a player ‘followed by Liverpool’s scouting department’ and in the last season ‘there was even an expectation at Porto that the English could advance to the negotiations’ table’. 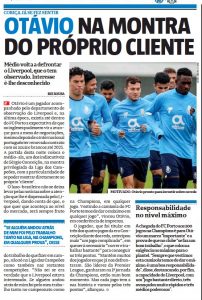 It’s said this attempt from Liverpool could have happened even after Otávio signed a new contract with Porto, referring to the renewal agreed in March 2021.

Record doesn’t have many more details on the chase, but didn’t hesitate to say that the Reds’ interest in the midfielder is still on. So it’ll indeed be interesting to see how he does at the Estádio do Dragão tonight.

The Brazilian is protected by a €60m release clause, which had been lowered to €40m during the month of June, and Liverpool never took advantage of that.