Last month, we carried a report from Mundo Deportivo, who explained Liverpool remain alive in the race for São Paulo starlet Gustavo Maia.

Barcelona are also interested in the 19-year-old and it was stated the La Liga winners have a pre-agreement to sign him for €4.5m.

Sport state there was an internal debate at Camp Nou as to whether they will have to renegotiate the price for the teenager due to the Covid-19 crisis. Therefore, his transfer has been ‘on standby’ for three months.

This could have given a lifeline to the Merseyside club, but it’s now claimed they will not be able to secure the youngster’s services. That’s because Barca have decided to comply with what was initially agreed for Maia’s transfer, taking into account Liverpool’s interest. 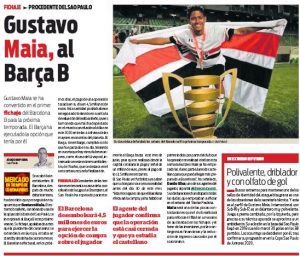 According to the report, the La Liga winners will make a payment of €4.5m in the next few days.

Maia is set to become Barca B’s first signing of 2020/21 season after the Spanish champions decided to execute the option they had for his signing.

This would end Liverpool’s chances of signing Maia this summer.