After managing eight goals and eight assists for Bayer Leverkusen last season, Florian Wirtz has eight goals and 12 assists to his name in all competitions this campaign.

The 18-year-old’s fine form not only helped him debut for Germany in March 2021, but has also seen him draw attention from elsewhere. This week’s SportBild explains Liverpool are one of the sides to have the attacking midfielder in their list of targets.

The magazine takes a look at the teenager’s development at Bayer Leverkusen and to discuss it, they have taken views from Lukas Podolski, Olaf Thon, Schalke’s super talent of the  1980s, and Eintracht Frankfurt legend Karl-Heinz Körbel.

Wirtz’s current deal with the Bundesliga club will run down in 2026, but Thon claims the Germany international could change clubs after this season. Meanwhile, Lothar Matthäus has advised his compatriot not to leave Leverkusen until 2024.

Körbel views the teenager as a candidate to replace Sadio Mané at the Merseyside club. The current Eintracht Frankfurt director believes Wirtz can succeed under the orders of Jürgen Klopp at Liverpool.

“A player like Wirtz needs an environment in which he feels comfortable in order to develop,” Körbel said. 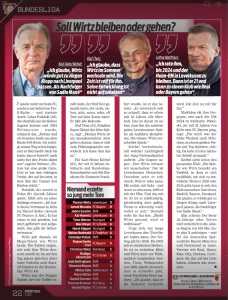 “If he leaves in 2023 or 2024, he can choose the club: Barcelona, ​​Madrid, Bayern, Liverpool. I think he would do well with Jurgen Klopp at Liverpool. As the successor to Sadio Mané.”

SportBild report that if Liverpool or any other club move for Wirtz, they will have to spend big because they state his sale ‘will certainly’ generate a fee in the region of €100m plus.