Liverpool’s need to sign a midfielder in the ongoing window is mainly down to their failure to retain Georginio Wijnaldum as the Dutchman left Anfield to join Paris Saint-Germain on a free transfer.

Saúl Ñíguez has been pushed forward as a target and on Monday, we relayed news from Spain that Atlético Madrid rejected €40m offer from the Reds for the midfielder.

Barcelona also have an interest in the player and have plans to offer Antoine Griezmann in exchange for the 26-year-old.

Mundo Deportivo claim the La Liga winners are in a ‘hurry to resolve the possible departure of Saúl Ñíguez’ and a possible swap deal with Griezmann would ‘fit’ them. However, Ronald Koeman’s side are not the only suitor for the Spain international.

It’s claimed Liverpool are ‘very interested’ in Los Rojiblancos’ man, after losing the Netherlands international. The Merseyside club’s proposal of €40m ‘does not convince’ Diego Simeone’s side, who are ‘asking for at least €50m’.

The difference in supply and demand between Liverpool and Atlético has allowed Barca to advance with the exchange deal involving Saúl and Griezmann.

The Frenchman would give priority to Atlético, if he decides to leave the Camp Nou. Both players would welcome this operation and so would the managers of the two clubs. 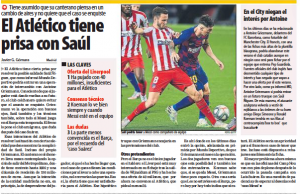 Jürgen Klopp’s side are ‘very interested’ in Saúl and Atlético want to get rid of him soon, if there’s a possibility.

If Liverpool can improve their offer, a deal could be concluded, provided they also reach an agreement with the player.