Bruno Fernandes continues to be the man of the moment in Portugal, as the transfer rumours about him won’t leave the headlines.

This Saturday, newspaper Record reports the addition of AC Milan to the race which already counts with Liverpool and Atletico Madrid.

The outlet says the Serie A side are preparing to guarantee the midfielder’s signing in the summer, and have some advantage in the race, since Bruno Fernandes has already played in Italy and speaks the local language fluently.

Regarding Sporting’s efforts to keep the player, Record contradict themselves a little bit. They first say the club will ‘hardly resist’ these attempts, and then write the Lions ‘will resist… until the limit’. 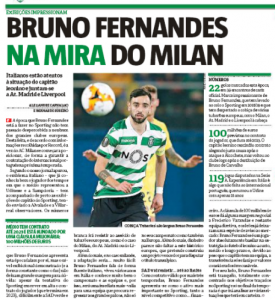 Bruno Fernandes is currently the most important player in the squad, but Sporting just can’t say no to the offers that should arrive in the summer.

The player is protected by a €100m release clause, and that’s the reference Sporting will use so they can get the bids as high as possible.

And although it’s only Liverpool, Milan and Atletico who are being named today, we’re pretty sure other clubs will be added to this list until the summer.