It’s Wednesday, and that means SportBild is here with more transfer claims ahead of the summer window.

Timo Werner is the man chosen this week, and it’s no surprise that Liverpool is the highlighted destination. The German magazine has been linking the Reds for more than a year.

In January 2019, it was reported Anfield was the ‘perfect’ destination for the RB Leipzig player, and Jurgen Klopp would be the ‘ideal’ manager.

Claims carried on throughout the year, and then on January 20th 2020, Bild claimed Werner would be keen on a move to Liverpool, repeating the reasoning of a year earlier.

Wednesday’s edition says ‘Liverpool are serious’ with their interest, and ‘want’ the Germany international.

Other clubs are interested, yet it’s thought the Merseyside club have a better chance, and that Klopp has the player on his wanted list.

Despite Manchester United being the striker’s favourite English club, Liverpool are still presented as being in pole position. The ‘ideal’ style is once again given as a reason, as is the current level of the club and ability to challenge for the biggest prizes.

SportBild even claim Liverpool considered moving for Werner in January, and there was some kind of contact. Signing the player in the winter market and loaning him back was an option, with communication between RB Leipzig’s Oliver Mintzlaff and the Reds being 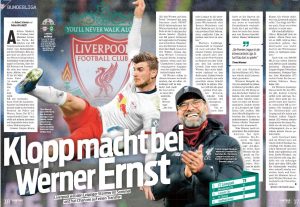 That was quickly discarded and all eyes now turn to the summer.

There is doubt thrown in, about Werner’s desire to leave Germany, and whether he’d even get in Klopp’s team. For now, this all largely feels like SportBild continuing a story they’ve been pushing for some time.