With AS Roma vs Ajax looming in the Europa League, Gazzetta dello Sport decided to take a look at both squads.

As both are brimming with potential talent, the easy comparison was the midfield situation, with both Gonzalo Villar and Ryan Gravenberch shining for their respective clubs.

They add a bit of transfer gossip in there, explaining that while the Spaniard is being tracked by Atlético Madrid, the Dutchman has many suitors in the Premier League currently ‘pursuing’ him, among which are Chelsea and Liverpool.

Manchester City are also mentioned, although with their pool of talent in midfield, Phil Foden already shining and Kevin De Bruyne signing a new contract, that move seems unlikely.

Liverpool, down their end, are looking increasingly likely to need a Georginio Wijnaldum replacement, with Gravenberch certainly capable of being used in his compatriot’s role at Anfield. 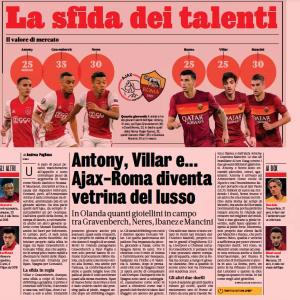 He’s very young (still only 18), giving Jürgen Klopp plenty of time to mould him to his heart’s desire, but already has three Netherlands caps to his name, and is one of the first names on the team sheet at Ajax these days.

He’d be costly, with Gazzetta valuing him at around €35m (meaning the Eredivisie side will ask for more), having only recently extended his contract in June last year, but he’s certainly someone Liverpool appear to be considering.