When a player linked with a move to the Premier League states he wants his move sorted in the next week or so, that normally tends to send rumours into overdrive.

For some reason, Alisson doing so on Sunday following Brazil’s friendly win over Austria hasn’t done that, even if his future and a potential move to Liverpool are discussed in Monday’s edition of Il Tempo.

The bottom line of the story is the same as it’s always been, in that AS Roma aren’t particularly interested in selling their star goalkeeper, but if the right (and by that, they mean expensive) offer comes in, they’ll begrudgingly make a big profit.

What is new, however, is the news that his agent is currently talking with the interested clubs, which include Liverpool, Real Madrid and Chelsea. 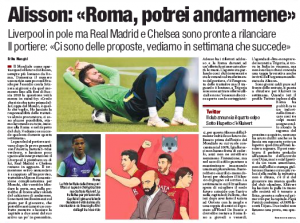 Jürgen Klopp’s side are said to be ‘in pole position’ to get a deal done, even if a transfer is still some way off, as no ‘official bids’ have been received by the Serie A side.

Following last year’s steal that was the transfer of Mohamed Salah, AS Roma are sure to make things a lot more difficult this time around, and while Alisson would like to have his future sorted prior to June 17th, when the World Cup starts for Brazil, we’re not sure that’s quite how things are going to work out.