Home Europe Liverpool ‘on the prowl’ to get signing for Klopp – Ambitious Reds...
SHARE

Jürgen Klopp loves Kylian Mbappé and the Liverpool manager has been in regular contact with the Paris Saint-Germain star and his entourage, according to multiple reports over the past year or so.

The forward’s contract runs down in 2022 and earlier this month, Cadena Ser reported he has turned down three renewal proposals from PSG.

Cadena Ser’s claim is mentioned again in Sunday’s edition of AS. The newspaper also relays claims made by Le Parisien that the France international will not be representing his country at the Tokyo Olympics for two reasons.

The fixture congestion of this season and the summer’s European championship is the main reason why the 22-year-old doesn’t want to travel to Tokyo.

The second one is tied to his future. It’s claimed the World Cup winner wants to make a decision on where he will play next season after Euro 2020.

AS then explain Real Madrid is the former AS Monaco man’s preferred destination, if he decides to leave Paris. For this reason, Los Blancos are closely following his situation at PSG.

Zinedine Zidane’s side are not the only one in the picture as the Merseyside club are interested in Mbappé. According to the report, ‘Liverpool are also on the prowl’. 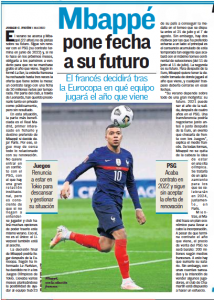 Despite having over a year left on his contract, the Ligue 1 side have no intention of letting the player leave for cheap. They want €200m and to this cost his huge salary must also be added.

Real Madrid are willing to make an effort for Mbappé, thanks to their ‘healthy accounts’ and the intention to raise funds by selling some of their players.

There’s no mention whether or not Liverpool will be able to financially compete with the La Liga giants.