Liverpool star Mohamed Salah has poured doubt on his future at the club, stating that ‘it’s hard to say’ how long he will remain at Anfield.

The Egyptian forward has been the star of the show at the club since arriving in a £37.8m deal from Roma back in 2017.

He’s since broken all sorts of scoring records, with a stunning 108 goals and 44 assists in 172 games for the club, while also helping them to Champions League and Premier League titles.

Those kind of numbers have put him up with the very best players in the world and inevitably rumours about interest from the biggest clubs have been present.

These have always been batted away by Liverpool, who have Salah tied down to a deal until 2023, and the player himself, who has always insisted he is happy on Merseyside.

That is something he maintains but has now hinted he is looking beyond the club and eyeing up a move elsewhere.

“Who knows what will happen in the future, but right now I am focused on winning the Premier League and the Champions League again with Liverpool.

“It’s hard to say how long I’ll stay with Liverpool, right now I can say that everything is in the club’s hands.

“Of course I want to break records here and, I repeat, all the records of the club, but everything is in the hands of the club.” 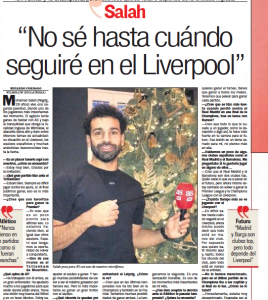 The Anfield favourite was also quizzed about the disappointment of losing a Champions League final to Real Madrid, and the challenge from Sergio Ramos which resulted in his exit from the match, and made it clear that’s now behind him: “I think everything that happens to a player, like disappointment or something like that, makes you stronger in your career for the future. That injury is a closed topic for me, I don’t think about it anymore.”

Salah last renewed his contract with Liverpool in July 2018, and that deal runs until 2023.