PSG have again qualified for the Champions League semi-finals, and as such there should be a lot of optimism around the club. Yet, not all is perfect in Paris.

They’re three points behind leaders Lille in Ligue 1, and there’s growing nervousness around the situations of Neymar and Kylian Mbappe, with Liverpool and Manchester City being mentioned when it comes to the latter.

Both PSG stars have contracts which expire in June 2022, so that puts the players in strong positions and their club under pressure. L’Equipe report that PSG have been trying for a while to find agreement with Mbappe, keen to announce his renewal with ‘great fanfare’.

So far they haven’t managed to do so, and that’s partly because Mbappe fancies an adventure abroad. The France international has ‘Europe at his feet’, with ‘Real Madrid, Liverpool and Manchester City’ all keen on snatching him away from Mauricio Pochettino’s side. 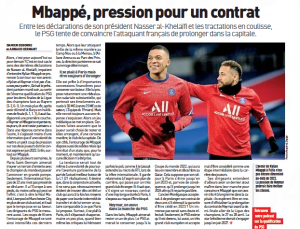 PSG are offering a salary of €30m a year, and it’s got to be considered unlikely that either Premier League club would go to such an amount.

Regarding the renewal, there’s the possibility of a relatively short extension, perhaps until 2024, which would mean the 22-year-old wouldn’t be tied down for too long.