Home Europe Liverpool told Klopp will leave for beach or Germany, by man who...
SHARE

Former Liverpool midfielder Dietmar Hamann has warned the club to enjoy Jürgen Klopp while they have him because he will leave for the beach or German national team eventually.

This week marks five years exactly since Klopp took charge of his first games for the club back in October 2015, when they took on Tottenham and then Rubin Kazan in the Europa League.

It’s been a rollercoaster ride for Liverpool since, with Klopp leading them to a sixth Champions League title and their first league title in 30 years.

He and his team signed a new deal in December that will keep them at the club until 2024, which would mean nearly a decade at Anfield.

And Hamann believes his compatriot will definitely be leaving at that point, even though he wishes it weren’t true.

“It is astonishing that Jürgen Klopp has already been a coach at Liverpool for five years,” he told SportBILD.

“But when you are successful, time goes by faster.

“Since the Champions League victory against Tottenham in 2019 and the first title this summer for Liverpool after 30 years, this coach is a living legend.

“I would wish for Liverpool that he would still be the coach in 2025.

“But either Klopp will be lying on the beach, or he will be the coach of the German national team.” 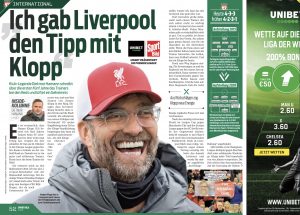 For now Liverpool can enjoy Klopp while they have him and look back happily on an appointment that has proven to be a masterstroke in all regards.

Hiring the German to replace Brendan Rodgers was seen as a wise choice by many five years ago given the impressive work he had done at Borussia Dortmund during his time there.

Naturally, though, there were doubters, with some questioning whether he could adapt his high-energy style to the rigours of the Premier League.

Hamann was not one of them and instead may have played his part in bringing his fellow countryman to Anfield.

“He was a good and experienced coach at the time. Today he is the best coach in the world,” he added.

“I remember the late summer of 2015, when I was travelling with the team as Liverpool ambassador.

“The then coach Brendan Rodgers (47) was under a lot of pressure. I went to the current CEO Billy Hogan, who was still Commercial Director at the time, and threw Jürgen Klopp’s name into the ring.

“I said that Liverpool needed Klopp, that he understood the club and the city. I raved about his successes with Dortmund.

“Of course, I can’t judge whether my recommendation contributed in part to the Klopp commitment. When Klopp introduced himself as “The Normal One” in October, I knew that Liverpool was a good idea.”