Today’s edition of Spanish newspaper AS has a story on Jan Oblak’s contract situation at Atletico Madrid.

The goalkeeper’s current deal runs down in 2021 and has a release clause of €100m. The Slovenian is ‘disappointed’ with the leaders of the Europa League winners because it’s been 12 months since they promised him to offer a better deal.

He feels annoyed and is hesitating over an extension, while his employer remains confident an agreement could be reached before Christmas. The report also talks about the clubs that were interested in securing his signature.

In the summer transfer window, Liverpool and Chelsea hare said to have shown their interest the 25-year-old before they signed Alisson Becker and Kepa Arrizabalaga respectively. 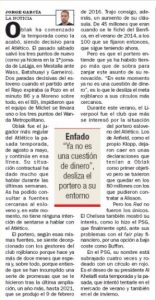 AS claims the Atletico custodian was Jurgen Klopp’s first choice target for the goalkeeping position before the arrival of the Brazilian at Anfield.

The Reds were the ‘most interested’ club in signing Oblak, but they ended up signing the World Cup keeper from AS Roma for €80m, which is €20m cheaper than Oblak’s release clause.

Alisson is already a Liverpool fan favourite, so whilst Oblak deserves to be rated more highly, right now at least, there’s probably not too much upset at Anfield.