Liverpool icon Dirk Kuyt has praised the club for how they have reacted to the ongoing Coronavirus crisis.

With COVID-19 continuing to spread across the UK, the Premier League is currently suspended until the end of April.

That deadline is already the second that the league have put in place, having already pushed it back on one occasion.

However, with the situation worsening, it is looking increasingly likely that a new deadline will have to be drawn up if the league is to be completed.

For many, it is now implausible the campaign can be finished, with it widely felt the season has to be voided and scratched from the record books.

That would see Liverpool, who are currently top of the Premier League and 25 points clear, miss out on their first Premier League crown and league title in 30 years.

So far the club have not acknowledged that that could be their fate, something Kuyt believes they deserve praising for.

“Everything has to go now to stop the virus,” he wrote in his column for De Telegraaf.

“Everything else is less important now, especially football. Besides, I’m not the right person to talk about that.

“Klopp said it fantastically. Football players and trainers are always asked for their opinion, but they don’t know everything. Rely on the experts. 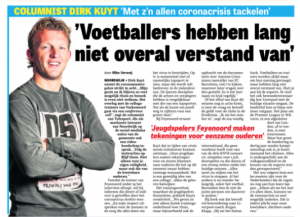 “I also find it admirable how Liverpool is dealing with the current situation. The league title would not have escaped them.

“The plan to complete the Premier League in World Cup form, in an enclosed part of London, is very interesting.

“But no matter how great the craving is after thirty years without a championship, you don’t hear anyone claim it.

“Everything is secondary to public health, and the choices of the experts are respected.”