Catalan newspaper Mundo Deportivo have reiterated claims of Liverpool interest in Rafinha, and don’t rule out the possibility of a summer move.

Rafinha has made 26 appearances for Barcelona this season, but when everyone is fit, there’s little chance of the player being picked for an important match. The 24 year old has seen his career stalled at times by unfortunate injuries and, keen to kick on, there’s a belief he could move.

With Juventus and Arsenal joining Liverpool in their interest, Mundo Deportivo say Rafinha is ‘considering the possibility of leaving the club in search of minutes that may lead to World Cup Russia 2018’.

The World Cup appearing on the horizon is proving a transfer lever for potential moves around the world.

Some players are hesitant to move, feeling they’ve got a good chance 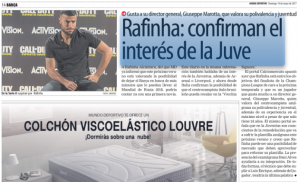 of being picked for their country if they stay where they are, and others know they’ll probably need a change of clubs, and more minutes, if they’re to make the Russia tournament.

The strength of Liverpool interest is unknown, but Rafinha, on a contract until June 2020, would provide a flexible option for Jurgen Klopp.