The Paris Saint-Germain forward has long been identified as a target for Jürgen Klopp and the manager has maintained regular contact with Mbappé and his entourage.

On January 29th, Sport reported the Reds have an ‘advantage’ over Los Blancos in the transfer chase due to the La Liga winners’ economic situation.

The France international is contracted until 2022 and AS on Friday explain his renewal is ‘more complicated’.

It’s claimed he has been rejecting renewal offers for two years, thanks to his high wages (€21m per season) and with his ‘mind set on not closing future avenues’.

Should Mbappé not sign an extension in the coming months, Mauricio Pochettino’s side must decide whether to retain the star for one more season and let him leave for free in 2022 or cash in from his sale in the summer.

Les Parisiens, like Real Madrid, are also impacted financially due to the Covid-19 crisis and they will have to consider selling the World Cup winner if he doesn’t sign a new deal.

Liverpool and Real Madrid get a mention and it’s claimed the two sides are ‘best placed’ to sign the player.

Neymar is close to agreeing a new deal at PSG. This has been reported elsewhere and relayed by AS. The newspaper further adds the Brazilian is trying to convince Mbappé to also sign an extension. 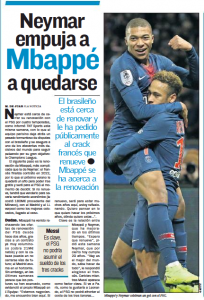 Meanwhile, PSG are looking at the option of taking Barcelona’s Lionel Messi on a free transfer in the summer.

If they end up signing Messi, AS explain PSG will not be able to afford hefty salaries for the Argentine, Neymar and Mbappé.

This would suggest Pochettino’s side could sacrifice one of the latter two to make room for Messi and with Neymar close to signing an extension, Mbappé may be sold in the summer.