Liverpool ‘have their eyes’ on Salzburg star Karim Adeyemi but will need to move quickly if they wish to keep him out of the clutches of Bayern Munich.

That’s according to Kurier, who say the German giants are working to bring the German star back to the club after letting him leave a few years ago.

Adeyemi is one of the rising stars of European football, having shone for Salzburg this season and broken into the German national team as well.

Several big sides in Europe are keen on his signature, including Liverpool, who have regularly been named among his suitors over the last few weeks.

While his manager recently poured cold water on the idea of a quick transfer, it’s clear something is building, and the rumours were going to continue regardless.

That’s where Kurier come in today, stating that a move to a top European club is ‘only a matter of time’ for Adeyemi and the only real question is whether it will happen in January or the summer. 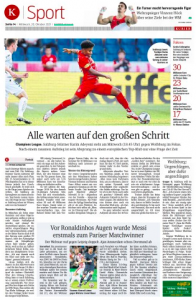 They are not the only interested party, though; in fact, the top clubs are ‘lining up’ to sign the forward, including Liverpool, as well as Leipzig and Dortmund, and it’s a case of ‘rather today than tomorrow’ in terms of when the clubs want to take the player.

To get him, they’ll have to pay between €30-40m, a fee that will make him the most expensive player in the history of the Austrian league, breaking the record set by Patson Daka’s move to Leicester this summer.

Interestingly, the president of his former club, Unterhaching, Manfred Schwabl, is also involved, and he sees the player in England, but that could involve a ‘stopover’ in Germany first.

So perhaps Liverpool will get their man at some point in future, although for now, it’s a case of convincing him against returning to Germany, and moving quickly to beat Bayern Munich.