Liverpool are reportedly signing someone from Portuguese giants Porto, but it’s not a footballer.

As reported by newspaper O Jogo today, the Reds are bringing in Vitor Matos to add to Jurgen Klopp’s extended coaching staff.

Matos had been working at Porto B, where he’s one of the assistant coaches for Rui Barros.

It sounds like the 31-year-old will have an interesting job with the Reds. O Jogo describe his next challenge as being ‘responsible for the development training of the club’s elite players, a cross-sectional project for team A and team B’.

Whatever that means, it sounds good. 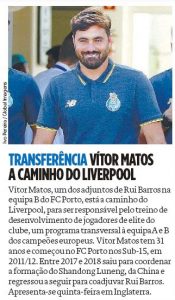 O Jogo writes that Matos started his career with Porto’s U-15 team in the 2011/12 season, and has had several roles at the Dragons since then.

He was only outside of the club in 2017 and 2018, when he went to China and coordinated Shandong Luneng’s academy. Then he returned to his home country to take up his current position, and subsequently caught the attention of Liverpool.

The newspaper says the coach is moving to England on Thursday.