As Porto prepare to receive Liverpool at the Estádio do Dragão in the Champions League tomorrow night, the Portuguese media is today obviously full of stories about the big match.

It turns out that two big local newspapers feature interviews with Jurgen Klopp’s assistants. While Record spoke to Vitor Matos, outlet O Jogo had a chat with Pepijn Lijnders.

The Portuguese coach, who worked for Porto in the past, talked about the feeling of having his former side in the same group as Liverpool.

“It was amazing! I’m a Portista and I have a very strong emotional bond with the city and the club. Not only because it was my childhood club, but also because I worked there for seven years and it had a big impact on me personally and professionally. I grew up watching FC Porto win and there are many people I admire and respect at the club. At the same time, the desire to win, to respect Liverpool’s enormous history, stood out.”

“(laughs) I won’t say… I’m just very proud because FC Porto are producing a lot of talent for the first team. And I’m also leave here a great compliment to the entire academy and to the staff of the first team, who trust and give the opportunity.” 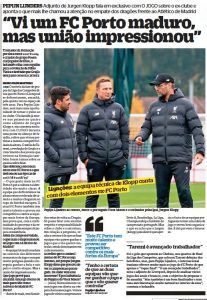 Meanwhile, Lijnders talked about Liverpool’s preparation for their trip to Porto and Jurgen Klopp’s interest in Portuguese football, as previously mentioned in other interviews.

“First of all, it’ll be fantastic to be back at Dragão. I can only speak with enormous respect and responsibility about the club and its structure. Regarding the question, I’m sure that both teams will want to win the game and that they will want to control it, being dominant at all times.

“We usually watch live games on the eve of our games. We see games from several leagues: Serie A, Bundesliga, La Liga, Championship and also from the Portuguese league. But what I think Jurgen meant is that he appreciates the fact that Portuguese teams have an idea of the game and are well organised. That’s where the interest comes from.”

Liverpool currently top their Champions League group after a victory over AC Milan, whilst Porto have a point following their draw with Atletico Madrid.