Rennes have set their sights on Chelsea defender Fikayo Tomori, according to L’Equipe.

For the right centre-back position, the French club are exploring the ‘ambitious track’ of the Blues defender.

Tomori was on loan at Derby County last season, where he played regularly under Frank Lampard’s orders.

The 22-year-old featured regularly in the first half of the campaign and that saw him land a new contract at Stamford Bridge.

Things haven’t progressed well in 2020 as he’s made only three appearances in all competitions in this calendar year. He hasn’t featured since the restart.

L’Equipe claim Lampard’s man is ‘still unknown to general public in France’, but he’s rated highly in England. That’s because he’s made his debut for the Three Lions in November 2019 and has ‘rich experience’ at the club.

It’s claimed the player’s CV has caught Rennes’ attention, but it’s difficult for them to sign Tomori because of the competition. 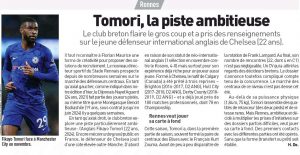 The newspaper claim Rennes ‘took information’ about the England international and there has been ‘initial contacts with various parties’, without establishing whether it’ll be a loan deal or a permanent transfer.