Home Europe Manchester United and PSG transfer, of around €100m, is being lined up...
SHARE

With Alphonse Aréola and Kevin Trapp on their books, there were rumours over the summer Paris Saint-Germain were after a world-class goalkeeper.

The easiest man to target was Jan Oblak, with a €100m release clause, but with the purchase of Neymar and the negotiations surrounding Kylian Mbappé, nothing ever really came of it.

With money a bit tight until at least next summer, Paris Saint-Germain will have to make do with the men at their disposal, but Le10 Sport reckon next summer is the time when a deal could be done. 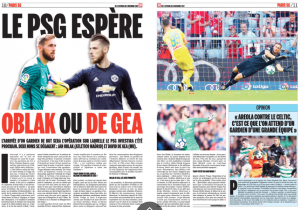 Unlike his Slovenian counterpart, the Red Devils’ shot stopper doesn’t have a release clause, which will make it far harder to get a deal done, as José Mourinho is unlikely to want to part ways with his number one man.

According to Le10 Sport, Antero Henrique, the Ligue 1 runners up’s director of football, has already asked Jorge Mendes about the Spain international’s availability, who has apparently said there could be room for a deal at the end of the season.

Frankly, we’ll believe when we see it, as De Gea seems quite happy with his current situation at Manchester United, with José Mourinho’s men currently tied top of the Premier League and comfortable in their Champions League campaign so far.

That, and we certainly cannot see the Red Devils asking for much less than €100m, even if, by that time, the goalkeeper will only have a year left on his contract (although the club have an option to extend it by an extra year).