Home Europe Levy ‘ready to make lots of concessions’ to get manager to Tottenham...
SHARE

Thursday morning saw the Mauricio Pochettino to Tottenham Hotspur rumours really kick off, and the following hours saw claims either way regarding the PSG manager.

If you were a Spurs fan wanting to hear that the Argentine returning was a real possibility, then there were certainly reports, from both England and France, ready to back that up.

Should you have been wanting to read the opposite, then that wasn’t in short supply either.

L’Equipe take a look in their Friday edition, and say that, yesterday afternoon, a source within the manager’s entourage ‘strongly rejected’ any contact with Daniel Levy.

However, they go on to say that two separate sources ‘confirmed’ a call from Levy to Pochettino, with the Tottenham chief believing the PSG boss can help fix his own worrying unpopularity.

One of the sources is quoted as saying: “Daniel Levy knows that, in the face of his unpopularity, he doesn’t have much choice. And he is ready to make lots of concessions. Bringing back Pochettino, very popular, could allow him to come out of the crisis from the top.” 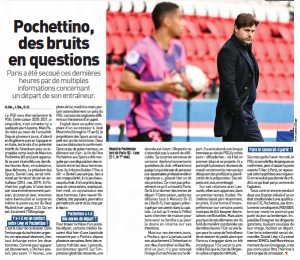 As for the situation at PSG, L’Equipe explain there’s been slight concerns over how settled the manager is, partly because he’s still living in a hotel.

His relationship with Leonardo isn’t perfect, yet isn’t terrible, and it’s insisted the French club have no intention of letting their coach go.

Compensation would be a possibility, although it’s considered unlikely Levy would be willing to part with a huge amount of such.