Home Premier League Chelsea “The level is higher” – Courtois on difference between Chelsea and Real...
SHARE

Chelsea were forced to sanction the sale of Thibaut Courtois to Real Madrid after the goalkeeper rejected the opportunity to sign an extension at west London club.

He had one year left on his contract with the Blues and the Champions League winners took time to sign him because the Premier League outfit wanted to bring his successor to the club.

The 26-year-old made his debut for the European giants when Julen Lopetegui started him ahead of Keylor Navas in his side’s 4-1 victory over Leganes on Saturday. The Belgian international spoke about the difference between his current club and the FA Cup winners, both on the pitch and during the training sessions.

“I get on with everyone very well, the communication with the defence is going well, even during the competition,” Het Nieuwsblad quoted Courtois as saying.

“In training, you see that the level is high. I am now experiencing on a daily basis that Sergio Ramos is the best centre-back in the world. The level [at Real MAdrid] is higher than at Chelsea.”

The La Liga outfit’s shot stopper also spoke about the differences between the home stadium of Chelsea and Santiago Bernabeu.

“It’s twice as big, of course, it’s a very different feeling. If you look forward, you only see a wall of people while at Stamford Bridge you can still see the sky or the hotel behind the grandstand,” he said. 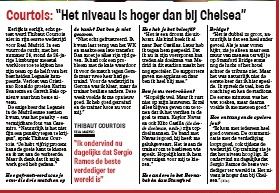 “Of course, this was not the first time I’ve played here. I know the language and I know the stadium. The first few minutes [against Leganes], I was stunned, but then I felt right.”