Home Europe L’Equipe: Georges-Kévin N’Koudou to Tottenham Hotspur should be a goer
SHARE 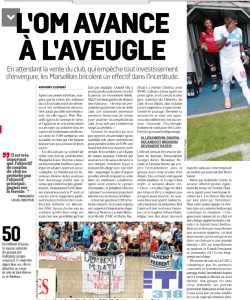 Georges-Kévin N’Koudou to Tottenham Hotspur is an increasing frustration. If claims we covered at the end of last week are correct, then N’Koudou has been holed up in a hotel, just waiting for the green light to complete his big move.

The 21 year old must be keeping things undercover, because there hasn’t been a string of selfies with him all over social media, or updates from his hotel.

Claims in England that Marseille’s impending ownership change was slowing the deal may not be the real reason for a delay, given Marseille have been getting on with other business, ins as well as outs, just fine. This is a club which has been in an off pitch crisis for sometime, it’s the norm.

Last week, Sport Witness were informed from sources in France that the reason for the wobble was said to be down to Spurs, and it would be no surprise if Tottenham were looking to get the best N’Jie/N’Koudou scenario possible. Whilst Marseille’s crisis may not stop transfers, it sure provides an opportunity for value deals, as has been evident in recent times.

Still, despite the problems, a deal looks on. French newspaper L’Equipe say in a big Monday Marseille feature that N’Koudou is a transfer that should happen.

Over at Marseille focused Le Phocheen, they give N’Koudou to Tottenham four green lights out of four, the same certainty as if something was announced officially.