Leicester City are yet to make an offer for Sebastián Cáceres despite reports of their interest from England.

That’s according to Mexican newspaper Récord, who say the Foxes are yet to make their move for the centre-back.

Leicester have been linked with a move for Cáceres over the last few weeks, with it believed that they are looking at the defender as they look to bolster their squad this summer.

Brendan Rodgers’ side are in need of a new centre-back to replace Wes Morgan, who has left a hole in the squad after his retirement.

It was felt a transfer could be on the cards after English media named him as a potential target but Récord report that they are yet to make their move. 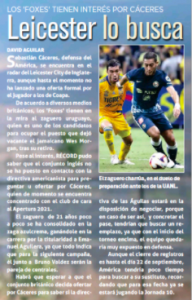 They’ve been in touch with those in charge of CF América, who have made it clear Leicester have not contacted them or launched a ‘formal offer’ at this moment in time.

The player and the club are simply focused on next season at this moment in time and waiting to see if the Foxes decide to make a formal bid.

At this point in time, it’s not clear if CF América will be ‘willing to negotiate’ a deal as they would have to find a replacement in a short space of time.

That is a problem for another day, though, with Leicester yet to be in contact or make a move for the 21-year-old.