Among the many Scandinavian players thriving in Serie A these days, Mattias Svanberg hasn’t gone unnoticed.

The 22-year-old Swede has followed in the footsteps of those before him, swapping the north of Europe for the south in hope of developing himself.

Now a key member of Bologna’s plans going forward, the central midfielder is also a target for Southampton and Leicester City.

That’s according to Il Resto del Carlino on Tuesday, looking at his growth over the past few years, finally establishing himself as essential in Sinisa Mihajlovic’s plans.

Bought in 2018 for €5.5m, Svanberg is now worth close to triple that, with it revealed his value is more around the €15m mark these days. 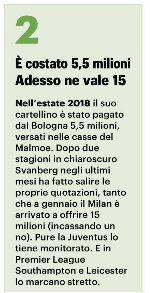 Milan are said to have offered that much in January, without much luck, with Juventus also monitoring him, while Southampton and Leicester ‘mark him tightly’.

We’re going to take that as ‘follow him closely’, but the gist is there: Svanberg has caught the eye of the likes of Ralph Hasenhüttl and Brendan Rodgers, and that could be both a great and a bad thing for Bologna.

On the one hand, they can get a chunk of money from Southampton, Leicester or any other interested side for a player they’ve developed over the past three years, but they also lose a key cog who has only just recently established himself.