The 29-year-old has been sidelined with an injury since last December and has informed the La Liga side he will join the team for preseason to continue his recovery work.

Barca’s medical staff will examine him and if the conditions are good, the Catalan club will ‘accelerate’ efforts to find a new club for the player.

Their desire is to make money from his sale, but it’s not clear if any of the suitors want to put cash on the table for the attacking midfielder.

Leicester and the two Serie A sides have shown interest in the Brazilian, and in case of the Milan duo, they would consider taking him on a loan deal. 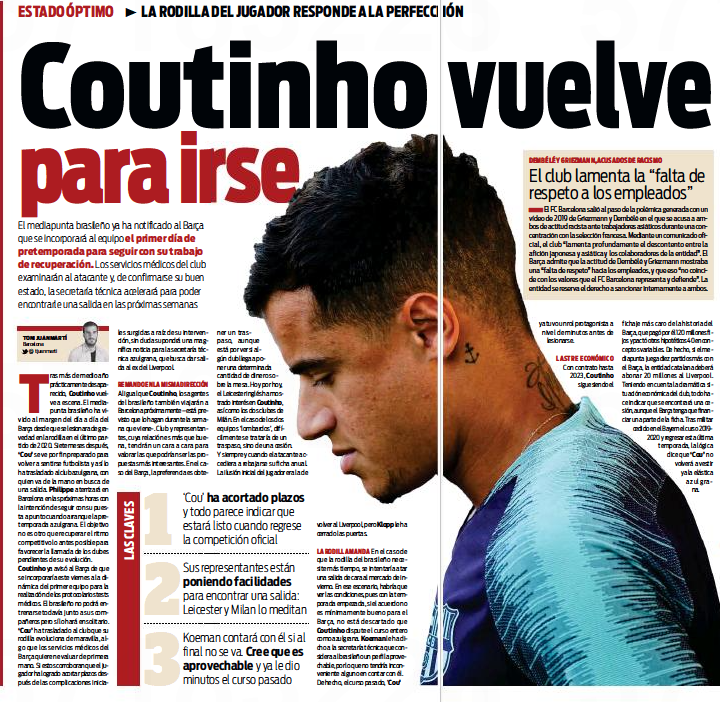 Ronald Koeman’s side are struggling financially and they need to get rid of those players who are no longer in the manager’s plans, to lower their wage bill and also raise funds.

If Coutinho makes 10 more appearances [currently at 90] for Barca, then they will have to pay €20m to his former club, Liverpool. To avoid this situation and also get him off the wage bill, Sport state a loan transfer seems to be the more logical solution this summer.

Coutinho’s agent shares a good relationship with the Spanish giants and they are set to meet Barca leaders next week, when the two parties will have ‘face-to-face’ talks, to ‘assess what could be the most interesting proposal’.

Leicester are in the picture and a loan move to the King Power will see Coutinho reunite with Brendan Rodgers.