Earlier this week, we covered a report from L’Equipe that discussed Leicester City’s interest in signing Boubakary Soumaré.

It also mentioned Newcastle United’s two failed attempts to sign the Lille player in the past.

The same newspaper today explains how the 22-year-old’s fine displays have seen him ‘eclipse’ Renato Sanches at the French club.

At the end of L’Equipe’s report, they detail the efforts made by the Foxes to sign the midfielder.

The France U21 international’s contract expires in 2022 and Brendan Rodgers’ side currently ‘hold the rope’ to take him away from the Ligue 1 side in the upcoming window.

It’s claimed the English club have ‘sent an offer’ and their proposal is believed to be in excess of €20m, with bonuses included. 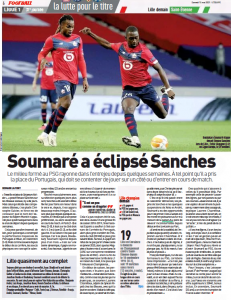 Christophe Galtier’s side are currently leading the league table with 79 points and are three points ahead of second placed Paris Saint-Germain.

Two more wins in their next two matches will see Lille become champions of France.

Soumaré’s immediate focus is on the next two matches, even though Leicester have made an offer to acquire his services.