Last night, in what we can call the Champions League’s group of death, FC Porto managed to clinch a very important win over AC Milan at the Estádio do Dragão.

According to newspaper O Jogo, that game attracted the visit of 21 clubs who sent scouts to watch it from the stands. One of them was Leicester City.

The Foxes had already been in Portugal watching other matches this season, and now enjoyed a great atmosphere during the Dragons’ 1-0 victory over the Rossoneri.

Even though O Jogo doesn’t seem to have a clear idea of who Leicester City’s target was in the match, we can recall the one player who was linked with a move to the King Power Stadium this summer. That’s Porto midfielder Otávio. 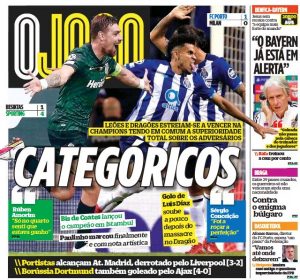 Otávio’s contract with Porto nearly ran out in June, and before he signed an extension, Leicester City were named as one of the clubs who wanted him on a free move.

Reports both from Brazil and Italy claimed that, as the Foxes apparently made an approach to get to know the chances for a deal.

Playing wide on the right last night, Otávio had a decent game, having two shots on target and helping the home side to hold the win.

Now in case the Foxes are still interested in the Brazilian, there’s of course a totally different scenario this time. A free signing in the summer would be an obvious move, but now protected by a contract until 2025, he has release clause of €60m, which goes down to €40m between May and July of every year.