The 29-year-old hasn’t featured for Barca since the end of December due to a knee injury, and now wants to be ready for new season, either at the Camp Nou or at another club.

Barca are focused on either selling the attacking midfielder or sending him out on loan, and that’s partly because of the big money deal they agreed with Liverpool for his signing.

The La Liga side agreed a deal worth €120m plus €40m in bonuses with the Reds for the Brazil international.

Coutinho has made 90 appearances for the Catalan club and if he plays 10 more matches, Barca will then have to pay an additional €20m to Liverpool, and €5m more if they win the Champions League.

For this reason and due to the South American’s high salary, Barca, who are struggling financially, may find it difficult to have Coutinho in Ronald Koeman’s plans next season.

Mundo state the player has suitors in the Premier League, and three teams, Leicester, 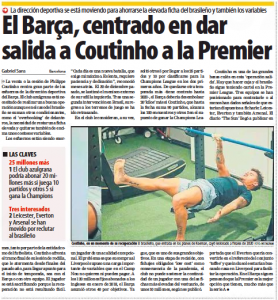 Everton and Arsenal are ‘interested’ in him. The trio have also ‘moved to recruit the Brazilian’.

Coutinho can reunite with his former manager Brendan Rodgers if the Foxes decide to sign him, either on a loan deal or permanent transfer.

More developments could be expected on this case in the coming weeks.