Philippe Coutinho is linked with Leicester City mainly due to his past connection with Brendan Rodgers as the Foxes coach trained the 29-year-old when the two were at Liverpool.

On July 8th, Sport named Leicester as one of the attacking midfielder’s suitors and it was also stated his agent was expected to meet Barcelona officials this week.

Mundo Deportivo state Coutinho’s desire is to return to the Premier League and his club believe the ‘best thing’ for them is to allow him to leave, either through a sale or on a loan deal, mainly to help them financially.

The Brazilian is one of the top earners at the Camp Nou and Ronald Koeman’s side will have to pay an additional €20m to Liverpool if he makes 10 more appearances for the club. Allowing him to leave will help them save on his wages and also avoid paying the Reds.

Coutinho’s agent Kia Joorabchian is well connected in England, and can help his client find a club that will meet the player’s economic and sporting demands.

Barca, however, are aware it’s difficult to receive approaches from the big English clubs as Coutinho is yet to regain full fitness from his injury.

There’s belief at Barca that Premier League sides would look at the South American once he starts featuring for Barca in pre-season fixtures. 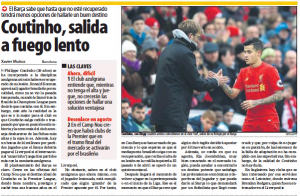 For now, Leicester are the only English club to get a mention as Rodgers’ side ‘have been interested in his services’.

Whether Barcelona and/or Joorabchian can convince Coutinho to join the Foxes isn’t mentioned in the report.