After the midfielder’s agent explained an ‘obsession’ with joining Bordeaux this summer, and then the French club didn’t really do much about that, Leicester City’s Nampalys Mendy agreed terms to join Serie A side Atalanta.

It took a big effort from Leicester City too, because Atalanta were only interested in a loan, so the Foxes had to back away from their previous position which had demanded a permanent transfer.

Leicester City probably wanted assurances over the loan becoming more than that next summer, and will have expected Atalanta to pay to have Mendy for the current season. 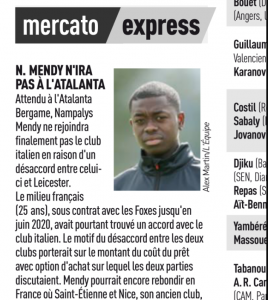 Somewhere along the way it’s collapsed, and L’Equipe say the deal fell apart at the last minute.

The French newspaper explain in their Saturday edition that the loan collapsed because Leicester City and Atalanta couldn’t agree on a loan fee.

That now leaves Mendy looking for a new club before the window closes. Fortunately, Saint Etienne and Nice are interested, but it will all depend on Leicester’s demands.

Mendy and his representatives will be annoyed by the developments, but there’s only so far they can expect Leicester to bend.