Home Championship Leicester City player talks about his future – What he wants from...
SHARE

Leicester City midfielder Adrien Silva had a lot to say in his four-page interview with Portuguese newspaper Record this weekend.

Currently loaned by the Foxes to French side Monaco, the player is getting close to the end of the spell, and should soon find a new solution for his career.

Part of his chat with Record was especially about this decision, as he enters his final year of contract with Leicester City. And Adrien Silva makes it pretty clear he’ll choose very carefully the place where he’s spending the coming seasons.

Asked if playing regularly and fighting for titles are his main objectives, the midfielder ‘didn’t hesitate’ in his answer.

“I won’t be here with ‘soft talk’: there must be a combination of several factors, including these two that you mentioned. It has everything to do with the performance we have achieve; goals of each club, if they want athletes with a competitive mentality and a desire to win titles,” Adrien Silva told Record.

“I’ll always make the decision due to several factors. Obviously, the financial part is important. After all, in all professions, the people of higher quality, who demonstrate the will to continue and evolve and who want to win are, in theory, more valued.” 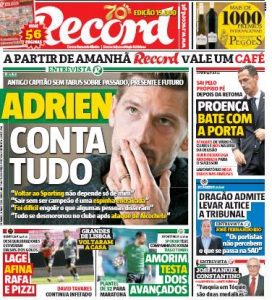 When asked about Sporting, Adrien Silva had a good chance to make it clear to the Lisbon media that he’d like to return. But his answer was surprisingly cold.

“People have to realise that it doesn’t just depend on the player’s will for things to take place. It is not just up to me. It’s as simple as that. In fact, I would prefer not to talk about it any more.”

He was also quizzed if at the age of 31, he thinks he’s soon signing his final contract, and what he sees himself doing after retirement.

“I still don’t think that way. The next contract will be just one more. I’ll face it with the professionalism that I’ve always shown. Of course, if it’s a four or five year contract, I’d have to think that it may even be the last one [laughs]. Then you have to see how the body responds. I let things go.

“It’s still early, I’m 31 years old, and I plan to play a few more seasons, but I will think about it, I admit. In addition to the investments I have already made and can still make, I’m evaluating the areas that could please me. But I believe that I’ll want to stay connected to football.”

Adrien Silva also talked about watching ‘The Last Dance’ series, about Michael Jordan and the Chicago Bulls, and despite loving it, he couldn’t compare his retirement to the one of NBA’s biggest star.

“Excellent question. Not all athletes think the same way… Some people worry a lot about the last image. I, on the other hand, will play until I can’t do it anymore! It’s my passion, where I feel fulfilled. Being in a dressing room, training, playing with thousands of people. Providing positive emotions. It’s fortunate and a pride that there is no equal. I don’t think like Michael Jordan [laughs]. Football will leave me and not the other way around.”