When Adrien Silva left Sporting for Leicester City, the Portuguese club was a lot different to how it is now.

Bruno de Carvalho was then the president and he fell out with much of the squad, including the midfielder. Adrien’s transfer went through seconds after the deadline had passed, and that left him unable to play until the next window opened.

He was left living in a Leicester hotel and training with his brother.

There’s since been suggestions that Bruno de Carvalho may have been behind the delay, and that it was some sort of bitter strike against Adrien.

Now there’s a new president at Sporting, so Adrien’s love for the club could lead to a return. Currently on loan with AS Monaco, it’s not thought the move will be made permanent, so he’ll return to Leicester and have a year left on his contract. 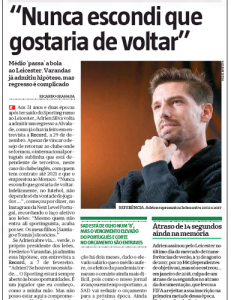 Quoted by Record, he’s said: “I’ve never hid that I would like to return. Unfortunately, in football, it doesn’t just depend on the player’s will.”

This time, it would likely also depend on the player taking a significant pay cut, but if his desire for this transfer is as strong as he suggests then that shouldn’t be a problem.